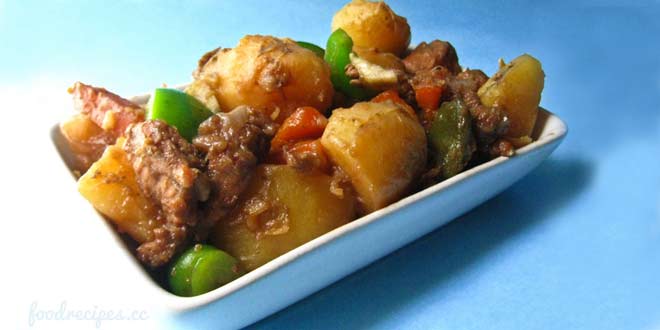 Off-day, idle wintry afternoon;
tongue and hands in two minds,
one of the appetite for the meaty and soupy kind,
the other of laziness despising any
thought of work too.

Now you might be wondering what this is all about. Why on earth is this person scribbling down poetry out of the blue? I totally get you. I mean, how on earth will you understand where this is coming from? After all, I haven’t told you a thing about what’s going on. But, to begin with, it was actually sort of out-of-the-blue. I mean, there was this day, pale sunlight falling down on the front porch, soft drizzle moving the curtains now and then and an imbuing stillness making the slightest movement of the drapes noticeable, me lying down on the sofa daydreaming, blissfully preoccupied with too far-fetched thoughts about life, determinedly avoiding any possibility of having to get up and work, taking it all in breath by breath. So good, so far. Then, suddenly, like there was some kind of inevitable force working behind it (later on, I realized it was the empty stomach), my thoughts swayed away from everything in the world and there I was, thinking of but food. Precisely, meat. How a bowl of pork soup or a plate of beef stick would have made this moment even better. How about some ham with cheese? And yet, shuddering at the thought of having to do all the things that one needs to do to prepare a meal for oneself. This, by the way, was unusual but I think I really liked the way I was spending my leisure time. And thus the dilemma, and thus the lines. Anyway, so this is what happens after this: I walk up to the refrigerator in desperation. It’s as empty as my stomach. Just a bowl of plain rice left from the other night. Disappointed, more at myself than the sight, I go to the kitchen. Nothing. A few potatoes, carrots and green beans. Hell. I open the refrigerator again and look into the deep freezer. A chunk of pork meat. Brainstorming all this while, I gotta do something I tell myself. I make a mental note of the things I have and start straining my mind. Now if you think that I could have simply ordered something from outside rather than go through all of this, then let me tell you that we don’t have burger and pizza hubs popping up everywhere in this part of the world which is sad given such circumstances. So where was I? Yeah, I make a mental note of all the things that I can use for a meal. I strain my mind. I wait for it. Pause. Silence. BANG! E U R E K A!! Why not make some soup with pork, potatoes and the few vegetables that I have in the kitchen? What in the world am I waiting for?

As it went, I happened to remember a Japanese recipe which is basically prepared with meat and potatoes, called “Nikujaga”, literally ‘meat’ and ‘potatoes’. Interestingly, it’s a recipe introduced by the Japanese Navy in the early 20th century to improve the sailors’ diet and make it more nutritious. However, later on, it became a very popular dish in Japan and is consumed in every home. Nikujaga is high in energy plus easy to prepare and is done in no time. It’s also a high source of vitamins which makes it a very regularly consumed dish in Japan.

Now, you’ll ask me how I made it. Before I tell you, I think it’s one of the healthiest dishes which are so damn easy to prepare. 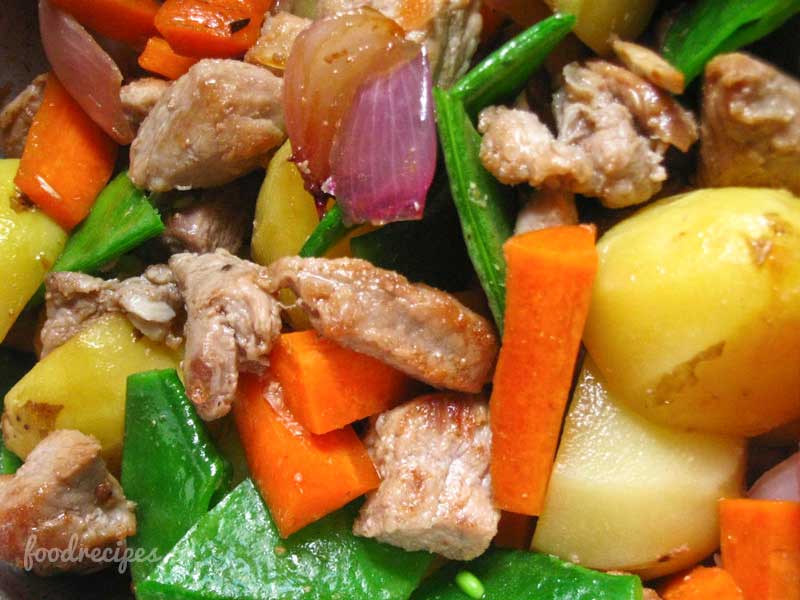 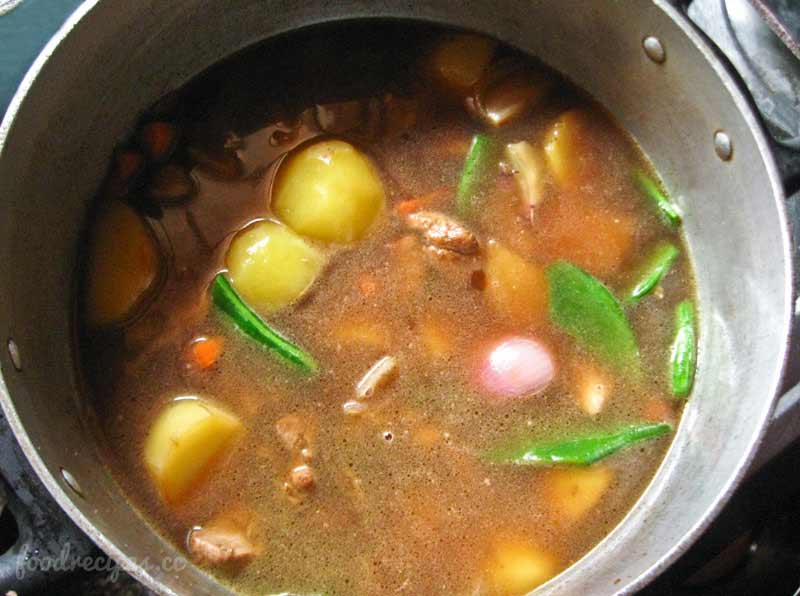 Now heat oil in a saucepan, sauté the meat until it turns brown on each side. Add the potatoes and carrot, flat beans and onion . Add some more oil and sauté it with the meat. Add some water and soy sauce. Add capsicum and salt to taste. Then, simmer at medium heat until it becomes thick and gravy. 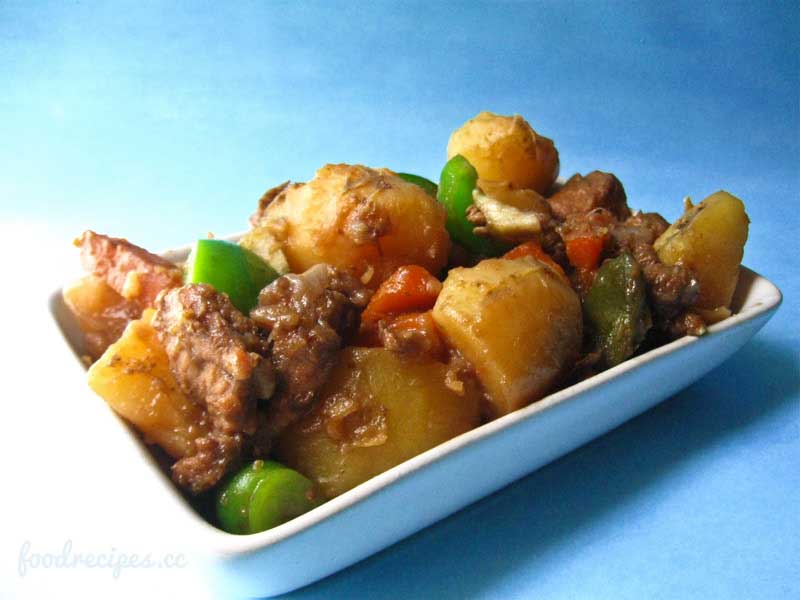