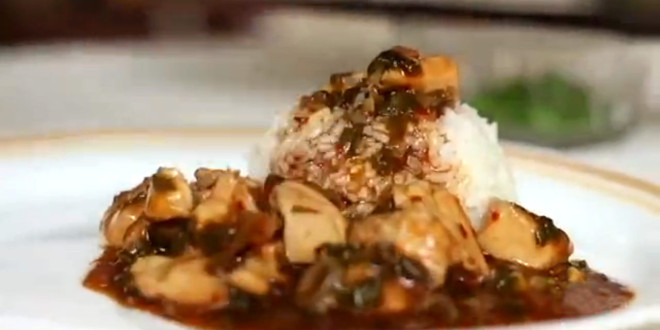 Orange chicken is an American Chinese dish. It is most commonly found at North American fast food restaurants consists of chopped, battered, and fried chicken pieces coated in a sweet orange-flavored chili sauce, which thickens or caramelizes to a glaze. It is most often found as a variation of General Tso’s chicken rather than the dish found in mainland China. Here’s a recipe on how to make orange chicken.

Orange Chicken is a popular chicken dish with a typical Chinese flavor. It gets its name from the use of fresh Orange juice in the recipe.

Use a wide pan, add 2-3 tsp of oil, and add the chopped garlic followed by the chicken. Cook the chicken on both the sides so that it is no longer pink. To make the sauce: To some water add 1 tbsp brown sugar, 1 tbsp chili flakes,1 tbsp ketchup ,1 tbsp vinegar, 1 tbsp soya sauce,2 tbsp orange juice, add some salt and mix it well. To the cooked chicken, add a pinch of salt, spring onions, and the prepared sauce. Let it simmer for few minutes and add little water to let the chicken cook completely (for about 15 minutes). To thicken the gravy, add little corn flour. Serve the gravy hot.

This recipe contains much great flavor, and so little unnecessary fat and calories from frying the chicken. We are pretty positive that even your friends or family members who usually prefer the fried version will go crazy over this dish.